In 2002, under the Firearms Act and managed by the RCMP, a Firearms Registry was established.  Currently, The Canadian Firearms Registry requires anyone in possession of a restricted or prohibited firearm in Canada to be added to the registry.

When the registry was first established, all firearms in Canada were required to be registered, but legislation changes limited registration requirements to restricted and prohibited firearms only.

To read more about the history, development, controversy and evolution of the Firearms Registry, see: https://en.wikipedia.org/wiki/Canadian_Firearms_Registry

It is illegal to possess a firearm without having a license, under section 91(1) of the Criminal Code of Canada. https://laws-lois.justice.gc.ca/eng/acts/c-46/section-91.html

Illegal possession of a firearm is one of the most common firearms criminal charges. It is very important that you understand the nature of your firearms or weapons offence charge, and that is where the legal expertise of Montes Law can help.

In Canada, firearms and weapons offences are serious offences, and may carry prison sentences depending on the severity of the charge and specifics of the case.

Are you in Toronto, Barrie or the Greater Toronto Area, and have been charged with firearms or weapon offence?

Have you lost, misplaced, or loaned your legally owned firearm, and require legal advice?

Do you have legal questions pertaining to the  ‘grandfathering’ of a prohibited firearm, and would like to chat with a legal professional in your area of Toronto, Barrie or the Greater Toronto Area?

If you answered yes, or have another firearms or weapons offence related query, please click here, fill out the form, and Montes Law will be in touch shortly.

What Is A Firearm?

Section 2 of the Criminal Code defines a “firearm” as a barrelled weapon that discharges projectiles capable of causing bodily harm or death, or anything that can be adapted as a firearm

There are three categories of Firearms in Canada:

The firearms in each category have varying specificities and with the proper licensing, you may legally own firearms in all firearms categories.

According to the RCMP website, the official source for correct legal information pertaining to firearms, the use, ownership and carrying of firearms in Canada the three classes of firearms are outlined:

In order to legally be entitled to possess a firearm, you must complete a Ministry Approved Safety Course known as a Canadian Firearms Safety Course, and pass both the theoretical and practical components of an exam. Once the course and exam are successfully completed, you can apply for your Possession and Acquisition License, or PAL.

Information from the RCMP for the Canadian Firearms Safety Course can be found here: https://www.rcmp-grc.gc.ca/en/firearms/safety-courses#a1

Once you complete and pass the Canadian Firearms Safety Course, you may apply for a Possession and Acquisition License.

Firearms Offences: Unauthorized Possession, Illegal Use Of Firearm, Trafficking, In Toronto, Barrie And The GTA

If you do not have a firearms license you may be charged with unauthorized possession.

While there are numerous potential criminal charges connected to firearms, firearms offences are typically categorized as either use or possession offences and carry varying sentences and are dependent on multiple factors.

Examples of a use charge may be: Careless Use of a Firearm, or Using a Firearm in the Commission of an Offence.

Examples of possession offence may be: Carrying a Concealed Weapon, or Possession of a Prohibited or Restricted Firearm with Ammunition.

This past June 2020, a Barrie man made the news when he was charged with multiple firearms offences. You can read about the story here:

As part of an ongoing gun-trafficking investigation, the accused from Barrie had charges ranging from careless storage of a firearm,  not reporting a lost firearm, to trafficking in a firearm, weapon, device or ammunition. Both use and possession charges were laid.

Using this Barrie Ontario defendant as an example, failure to report a lost firearm, would require a different strategy than a firearms trafficking charge. Which is why, if you have been charged with a firearms or weapons offence, it is necessary to consult a lawyer who has experience in this area of the law, in order to customize the best possible defence. 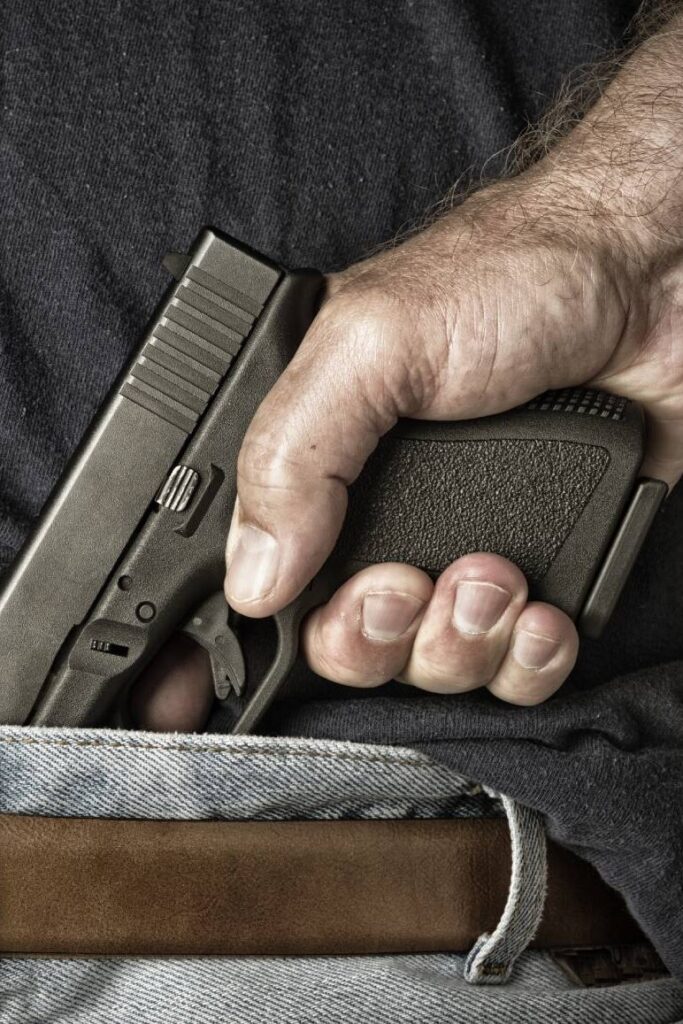 What is a Weapon?

Weapons are defined under section 2 of the Criminal Code as follows:

Weapon means anything used, designed to be used or intended for use

(a) in causing death or injury to any person, or

(b) for the purpose of threatening or intimidating any person

and, without restricting the generality of the foregoing, includes a firearm and, for the purposes of sections 88, 267 and 272, any thing used, designed to be used or intended for use in binding or tying up a person against their will;

Due to the broadness of the definition, what counts as a weapons offence, may not always be as clear as a firearms offence, which requires strict licensing for ownership.

In fact, depending on the circumstances and alleged offence, almost anything may be counted or included as a weapon. Possible weapons charges that are covered in the Criminal Code include:

Due to the complex and even interpretable nature of what is to count as a weapon under the law, your legal counsel must be familiar with weapons offence charges and help you to fully understand your charges.

Montes Law upholds the highest standards of legal professionalism for each and every client we serve in Toronto, Barrie and the Greater Toronto area.

You will need an honest and realistic approach to facing your firearms or weapons offence charges, which Montes Law, with a background in this area of criminal law guarantees to provide.

Martin has spent more than 10 years helping individuals navigate Ontario’s legal system. He has focused his legal career on obtaining results for his clients in trials and appeals at all levels of court in Ontario.

Montes Law was founded in 2013. Prior to opening his own practice, Martin worked at a high profile Toronto criminal defence firm where he focused exclusively on courtroom trial advocacy. He began his legal career articling with a prominent Bay Street insurance defence litigation firm.

Martin is a member in good standing of the Law Society of Ontario. He is also a member of Legal Aid Ontario’s Criminal Law and Family Law panels.

Whether you require emergency legal advice or would like to schedule a free consultation, contact us now.